The Government of Liberia through the Ministry of Agriculture on Saturday, January 9, 2021 distributed farming inputs to smallholder farmers and Multipurpose Cooperatives in Bong County to maximize productivity and empower them grow more food

The inputs include: fertilizers, water and agrochemical sprayers, rain boots, and safety gears among others. The agro inputs were procured through the Smallholder Agriculture Transformation and Agribusiness Revitalization (STAR-P)  Project with funding from the World Bank.

According to Ansu A. Metzger, the National Coordinator of the Smallholder Agriculture Transformation and Agribusiness Revitalization Project, the inputs were procured under the MOA’s COVID-19 National Emergency Food Security, Nutrition and Livelihood Plan developed in April last year to mitigate the pandemic’s impacts on farmers.

With support from the World Bank, Metzger said the procurement and distribution of farming inputs to local farmers across the country was part government’s responses to the impact of the COVID-19 pandemic on the agricultural sector. “So now what is going on here is the Government of Liberia emergency response to farmers under the COVID-19 pandemic,” Metzger said.

He furthered, “when COVID struck we all understood that the supply side would’ve been difficult for farmers so the government was able to solicit funds from donor partners and we were able to procure large quantity of fertilizer and agro processing equipment which will also be coming in coming months.” 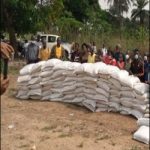 The farming inputs distribution kicked off in December 2020 beginning with farmers in Montserrado and continued in Grand Bassa, Margibi, Bong and Nimba last week and will continue to Bomi, Grand Cape Mount, Gbarpolu and Lofa Counties next week.

Presenting the agro inputs, Acting Agriculture Minister Robert Fagans, who proxy for Minister Jennie Cooper challenged the farmers to make maximum use of the inputs to boost their yields and safe the country from expending huge money on the importation of rice and other agricultural commodities.

He continued, “but you know the government will not jump and start making farm, so we got to go through the private citizens like your, give these things to your so that your can be able to produce more food.”

He recalled that prior to the Liberian civil war, Bong, Nimba and Lofa counties were the hubs for food production in Liberia; thereby calling on farmers in those counties to maintain their pre-war status. “Bong County, Nimba, Lofa those were top priority counties when it comes to food production, but this place is different this time. Your need to try to get back to that level,” Minister Fagans added.

Minister Fagans said the distribution of the agro inputs was the beginning of MOA’s support to smallholder famers in Liberia to enable them feed the country and transition to agribusiness.

He used the occasion to announce the celebration of this year’s “National Agricultural Fair” in Bong County, comes February 12 to the 14th. The “National Agriculture Fair” is a three day educational event that gathers farmers from across Liberia to showcase their agricultural innovations. At the event, awards are presented to the most hardworking and innovative farmers and multipurpose cooperatives.

According to Minister Fagans, this year’s event will focus on introducing Liberian farmers to agribusiness, to enable them become self-empowered.

Taking delivery of the items, Bong County Superintendent, Esther Walker praised President George Manner Weah and officials of the Ministry of Agriculture for putting smiles on the faces of smallholder farmers in the county. Sup.

Superintendent Walker warned the farmers against selling the inputs, but use them to scale-up their efforts. She said, “nobody should open market ground here with these things. I’m not telling your but I will put people in the field, anybody I see you selling one spoon of fertilizer outside, you will stay there and tell me who brought that fertilizer.”

For their part, two of the farmers, Madam Josephine Kanneh, a member of the Kpaai Rural Women Rights Structure in Palala, Kpaai District and Machael Pewu, Chief Executive Officer of Meni-Nina Farmers Incorporated of Belemue in Panta District thanked the Government of President George Weah and the World Bank for empowering them during the current economic crisis and the COVID-19 pandemic.

They on behalf of their colleagues appealed to the government and donors for more support in order to scale-up their efforts.