A project dubbed “PRODESOP” (Promoting Access of indigenous people to Decent Work and Social Protection) has been launched in Kintampo to enable the vulnerable especially women, the youth and persons with disability access social protection services.

The Bono East Regional Coordinating Director, George Padmore Mensah launched the project on behalf of the Regional Minister, Mr. Kofi Amoakohene. In his words, the Regional Minister stated that “PRODESOP is a 4-year social protection project aimed at leveraging on the fish value chain in the Pru East and West District Assemblies and ginger value chain in Kintampo Municipal and Kintampo South District Assemblies to provide employment for the poorest families in our communities”

The project which was launched on January 29, 2020, at a ceremony in Cheranda, a community in the Kintampo North Municipality is co-funded by the European Union (EU), four implementing partners and four Municipal/District Assemblies. 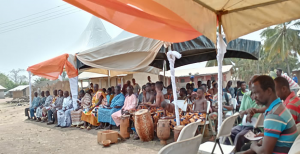 The Minister assured the people of his personal involvement in the monitoring of the project implementation to ensure that it achieves its set objectives and charged the chief executives of the beneficiary Assemblies to do the same.

According to him, the project is in line with achieving goal eight (8) of the agenda 2030 adopted by the UN members states for Sustainable Development which aims to promote sustained, inclusive and sustainable economic growth, full and productive employment and decent work for all.

On hs part, the Municipal Chief Executive for Kintampo North, Michael Sarkodie Baffoe was elated the project will provide infrastructural facilities such as solar dryers, warehouses, ginger washing, and processing facilities and most importantly support to beneficiaries to roll onto the National Health Insurance Scheme (NHIS) and existing pension scheme.

Mr. Sarkodie Baffoe also alluded to the fact that “this program is to help increase income security and access to health care and other social services which are indispensable for eradicating poverty, ensuring social cohesion and inclusive development.

The Deputy Executive Secretary of the Centre for Local Governance Advocacy (CLGA) disclosed that, 80% of the project funding was from the European Union (EU) and 20% from four (4) implementing partners being CLGA, National Association of Local Authorities (NALAG), Centre of Posterity and Interest Organization (COPIO) and Obrono Organic Farming Project (ABOFOP) as well as the four beneficiary Assemblies. She also stated that the overall objective of the project is to promote access to decent work and social protection for indigenous people in the Bono East Area of Ghana.

Finally, the Executive Director of Obrono Organic farming Project (ABOFAP), Nana Kwaw Adams stated that the project duration was from November 2019 to October 2022. He said, “The target beneficiaries will be 600 people 250 women, 230 youth, 25 men and 75 persons with disabilities. The beneficiary community/communities are to provide land as their local contribution for the project”.

He called for the full support of all stakeholders of the project to it successful end.