Sugarcane growers at Komenda in the Central Region, are calling on government to support them financially to grow more sugarcane to feed the Komenda Sugar factory as a new investor prepares to take over the management of the abandoned factory.

According to the farmers, since the collapse of the factory, most of them have been forced to go back into the production of cocoa and other cash crops for survival.

“We were forced to cut down our sugarcane and grow crops like cocoa and others so that we could survive but once the factory is coming back we will go back into growing of sugarcane because even sugarcane is more profitable than cocoa” Kwaku Wobir, leader of the Sugarcane Growers Association of Komenda said.

Former President John Dramani Mahama in May 2016 commissioned the $35 million Komenda Sugar Factory built with support from the Indian EXIM bank. The factory has capacity to produce 1,250 tons of sugar per day, and can create employment for more than 7000 people. It was expected to generate energy for its production activities, and also produce by-products such as molasses for the alcohol industry.

After several tests runs, the factory was abandoned, and some parts of it started rusting. Several challenges, including the lack of constant supply of sugarcane to the factory after its first test run, hampered its operations.

The shutdown of the factory has not only affected sugarcane producers, but also the alcohol Industry.

The supply of molasses as a by-product of sugarcane is used in the production of Akpeteshi, Ghana’s locally brewed gin. Players in that industry have also complained about the impact of the closure of the factory on their business.

According to them, the challenges in getting molasses to brew their alcohol is affecting them. 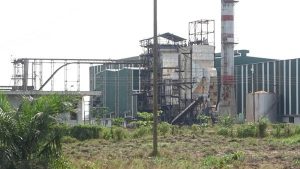 “When the syrup was in constant supply we were able to produce more alcohol, but now that the factory is not working it is difficult to get the syrup.Another challenge is that we don’t have a crusher to squeeze the juice from the sugarcane because the machine is old and faulty so we are only adjusting” Opanyin Ekow Quansah said.

Ransford Vanni Amoah, a former member of the Komenda Sugar Project Management Board however questioned government’s efforts in renegotiating a new deal in the payment of the $ 35 million loan facility from the Indian EXIM Bank, since the 5-year period for rep ayment will be due in 2021.

He says government’s decision to wait until the ban on public travels is lifted before the new investors commence the process to resume operations may not help matters.

” I don’t have a problem with the company, but the problem is that we are going to start paying that loan of 35 million dollars. How are we going to pay it if we don’t engage the people on a new deal and we all know the loan facility will expire in 2021 so what is government doing about it to renegotiate a new deal” he questioned.