“I made up my mind to go into farming way back in 2011 when I was very young. But the capital wasn’t there and also didn’t have much knowledge as at that time so I had to relax. I started in 2017 after I had gathered some money from some menial jobs I was doing while in the University” He said.

According to Obed, his interest in farming stems from his desire to help prevent food scarcity in the world with the increasing population and diminishing farmland size. He hopes to add up to efforts aimed at increasing yields through the use of modern technology and techniques with reduced health risks. According to him, money is not his motivation at all. He however believes when everything goes on well, the benefits will be enormous. “Because it really pays.” He said

Obed is yet to complete his national service but the 22-year-old already has two farms and has employed five people. Obed says he pays his workers daily, but for the permanent workers, he also pays them during harvest.

“I currently have two farms, a cowpea farm far in the Upper east region in a town called “Bitido-Binyinkundo” which I started while in school. I completed university in June 2019 and in August, I decided to start a mushroom farm here in Accra.”

All along, he knew it will require some money to start farming so he saved a lot from the pocket money his parents gave him and from the income he had from petty jobs he did while in school, especially during vacations.

Obed is into plants and crops currently but looks forward to adding livestock to it in the future. “Farming is a broad and great venture, from planting to animal rearing. I’m into plants now but looking to enter the animal field soon.” he added.

He stated that he is ever ready to support the youth who have passion for farming to also start their own farms.

He pleaded with the government to support youths with great ideas on farming, trust them with capital to kick-start and monitor their progress. By so doing, he said employment opportunities will be created directly and indirectly; dependency ratio will be minimal and there would always be availability of food and more money which is an add-on.

How much did he invest into the two farms?

“For the mushrooms, I proposed a budget of about Gh¢1,800.00 but I ended up spending Gh¢2,642.50p, excluding land acquisition. With the cowpea, I budgeted Gh¢2,000.00 exactly but had some balance left. I just used a single room-sized space for the mushroom farm. You actually don’t need a big land like that. It’s an upgraded system we were taught in school, which I practiced.  The Cowpea’s land size is two (2) plots” 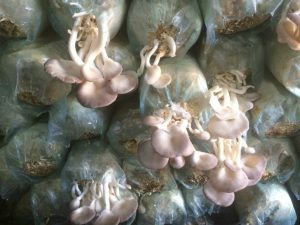 “I will be harvesting the Cowpea for the fourth time since I started in 2017. The first harvest of the 2 plots of  Cowpea farm fetched me Gh¢4,100.00  but I had to pay the labourers from this amount” He quickly added. Cowpea takes 8-9 weeks but we start to harvest on the 9th week because we allow the beans to dry on the plant.”

“The Mushrooms take about 2-3 months before harvesting and you harvest daily for 3 good months. My second harvest will be in about 3 weeks from now. The first mushroom harvest gave me about Gh¢1,200.00 profit excluding what I shared to others and consumed personally.

Threatening moments with the mushroom harvest.

“It was threatening but had a good one few days after. It took much time to complete the harvest, I had to get others to join in. And with Mushrooms, you deal with microbes, hence you need to take strict precautions so you don’t contaminate the mushrooms. And before I brought the others to help me to harvest, I had to train them” He said.

How did you get  market for your produce?

For the cowpea, I had a ready market for it. But with the mushrooms, locating the markets or buyers was quite difficult but we broke through. It’s quite easy now that we know most of them. So I can say yes, it was easy to get markets for the produce. Just some little stress at the beginning.

How does he manage his time since he is still doing his service?

“I barely have time for so many things now. The little time I get, I go to the farm to work and to supervise. It is stressful but, I mostly assign duties to the people I had brought on-board. But with the cowpea up north, I’ve put someone in charge. I only go there to check up once in a while.”

Message to the youth

The 22-year-Old farmer advised the youths to be hard working and not to fully depend on anyone before they start something. “People don’t really support you if you don’t start anything. The support comes after they’ve seen the potential in you. That also happens after you’ve made your hands dirty.”

Obed is of the view that the youth have a weird mentality about farming which he thinks must change. “Aside the fact that it’s labor intensive, it’s really cool.” He added.

Planting food crops in general is highly profitable but requires quite some capital to start and manage as well. However, once yield comes and you have a good target market, you reap very well. Hence, the youth should not run from it but rather embrace it.

“ Aside it being labor-intensive, we could reduce the stress in propagating crops by using farm machinery but those kinds of stuff are also very expensive to acquire; even if you’re to rent. So I have no option than to use the manual system (human labor) for now since that is cost-effective. Your yield will mainly depend on the effort you put in, and the viability (how good) of your planting materials (seeds for example). Therefore, it takes hard work and buying of good materials so you don’t record low yields. It’s fun though after you have series of harvests. You’d wish to do more when you see the money is coming small small.” He added.