Making Judicious use of farmlands- The story of Malom Foods

Malom Foods started as a backyard farm in 2014 at Dodowa in the Greater Accra Region by Mercy Lomo (A Zimbabwean) and her husband Alfred Lomo (Ghanaian) who cultivated vegetables for domestic consumption. After some time the couple went into commercial production after recording an increase yield year by year.

“We always had enough vegetables at home, and it got to a stage where we had so much harvest and took some to the Zimbabwean High Commissioner, who advised that instead of giving it out for free, we should grow these vegetables and sell. Through that, we started linking up with shops like Koala and through that, we decided to grow Exotic herbs and vegetables.”

Malom Foods has evolved such that now with a space of about 36 acres of farmland, it has over 50 varieties of exotic herbs and vegetables on a 15-acre landspace. It also include a 10-acre orchard of mango farm, maize, cassava, and other plants all within the 36-acre space, with enough room to even rear domestic poultry, goats, and a piggery.

“We decided to incorporate some animals, and that’s why we have the animals here because we found out it is healthier to rear and consume your own animals.  So Malom foods is like a continuous circle farm, you have your animals, which feed on the leftover of the farm produce; the animals also give us manure which we also plough back to the soil so nothing goes waste on the farm.” She said.

Though capital intensive, Malom Foods has its own dam which is used for irrigation purposes. This according to the CEO, Mercy Lomo enables them to farm all year round.  “We have invested in a drip irrigation system, we have our own dam, everything on the farm is irrigated so we farm the whole year-round. But with climate change and the way things are changing, we are considering drilling boreholes. We need water to sustain the plants.”

She added that they decided to venture into exotic herbs and vegetables mainly for local consumption because it was a niche in the market. “Things that are imported are what we wanted to grow so that they are affordable to the ordinary Ghanaian not only for the ex-pats or the rich,” She stated. 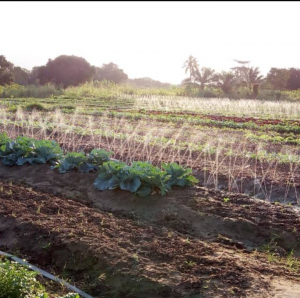 According to the Chief Executive, there are opportunities in growing herbs and vegetables as compared to other crops. But the problem is the knowledge of getting the right seeds and the ability to find the right markets.

With about twenty-five (25) permanent and casual workers, Malom Foods has judiciously managed it’s land space and grown to become a household name when renowned farms in Ghana are mentioned. It is no wonder it continues to win several awards. For instance, the Chief Executive won the Greater Accra Regional Best Woman Farmer during the 32nd National Farmers’ Day and emerged the 1st Runner up Regional Best Farmer award for Greater Accra during the 35th National Farmers’ Day celebrations.

With the successes that Malom Foods have chalked over the past six years, one will think they might have had formal training in Agriculture. As mentioned earlier, Malom is run by Mercy Lomo and the husband Alfred Lomo who mainly provide the technical and engineering works on the farm but both of them do not have any training in Agriculture.

“Neither of us had been to an agric school, the land was there and we decided to utilize it,” she added.

Mercy Lomo, with a Bachelor of Science degree in Applied Accounting and is a UK trained Chartered Accountant, met her husband Alfred Lomo, a professionally trained Engineer in London. They both decided to return to Ghana to settle after some time.

How they invest in the farm?

“In the beginning, we were managing the business through personal savings but now the business takes care of itself unless and we want to embark on other projects. Everything you see here is self-invested, through savings, investments, and good management”.

Mrs. Lomo stated that getting access to funds is a major challenge to all farmers because the banks are not ready to lend funds to farmers because farming is risky.  “Funding is also a major challenge. We do not want free money for farmers but we want facilities. For example with the Mangoes, if we are unable to sell, it will go waste and this has financial implications so a facility to build a warehouse is earnestly needed. With the packhouse and a dehydrator, we can now add value to mangoes, thus, creating jobs and paying more taxes to the government. Facilities for vehicles to support the farming business, for instance, Green Houses and Shade nets needed for good farming practices are very expensive but most of us farmers cannot afford.” She said

Another challenge she mentioned has to do with the farmhands as it is always difficult to maintain them. “Training the workers takes time and after training the person leaves, so training of workers becomes a challenge. Most farmhands just come in for the money, once they get it they leave, there is no passion for the farm work. “She said.

She called on Government to also consider waving duties on agricultural machinery imported by farmers into the country. She also called on the educated to venture into farming as a profession because it is more profitable.