“Even before I became a professional farmer, I had said to myself “I wouldn’t be an ordinary farmer who would just grow anything anyhow but rather I’d be a farmer that would be sought after.” Those were the words of the 2017 2nd National Best Farmer, Mrs. Mabel-Ann Okata Kwudzo.

She has more than two decades of farming experience as the CEO of Okata Farms and Food Processing. She has won to herself, several awards including the 2014 Volta Regional Best Agro Processor, 2014 MoFA Sliver Award, 2017 USAID – West Africa best rice farmer awards and the 2017 2nd National Best Farmer.

Currently, Mrs. Okata Kwudzo can pride herself of owning a 1000-acre rice farm, 100 acres of Maize farms, 10 acres of Cocoa farm, 20 acres each of local and Agric Palm plantations and a five-acre farm land where she grows all forms of vegetables. She is also into food processing and animal husbandry.

As a promoter of organic foods, the over sixty year old farming entrepreneur says she has never applied chemical fertilizers on any of her farms. “We do not use anything, not even a weedicide. Even before I went into mechanized farming, we were planting without fertilizers. ” She said.

“What I do simply is soil replenishing. I test the soil after or before every planting season and when I realise that it lacks in any nutrients, I grow mainly legumes to replenish the soil before the next planting season”  She said.

She disclosed that most legumes replenish the soil within a month or two. “After we have tested the soil and know what it lacks, we plant legumes such as beans and groundnuts. You may not need the beans but you need the plant to make the soil fertile again. ” she stated.

She added that sometimes she mixes the soil with cow-dang before tractors plough into the soil and this is what she has been practicing over the years in her farming career. 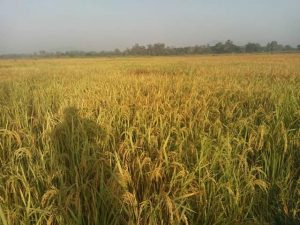 According to the Okata farms and food processing CEO, her yields have always been ten times better and healthier than those of other farmers who use fertilizers and other chemicals. This she said has attracted many famers to her and she feels privileged to train them on how she does it.

Because of her immense experience and successes chalked up, she has been doing a lot of training and mentorship for both existing and potential agro processors and farmers on her farm and at her processing site. Most of mentees are women with about 30 percent of them being young people.

“You know most farmers in Ghana are not professionals. They do not test the soil and replenish it. They grow anything anyhow on any soil because others are doing same. In the advanced countries, soils are tested to know the exact plant that has to be grown at a particular place. But in our part of the world, we plant according to what is in vogue, as to whether the soil supports it or not, and when yields go bad they end up using fertilizers and even too much of it. Such practices in the long run diminish the fertility of the soil, hence, the need for the training I have been doing” she said.

“Because fertilizer is sweet and when applied on the farm, it attracts worms and insects”

According to her, the application of fertilizers is very stressful as compared to the organic way of replenishing the soil. “The other challenge is the fact that most farmers who rely on fertilizers do not even know how to apply it properly.”

How did she go into farming?

“With regard to farming, I took a lot of inspiration from my dad.  My dad was a VRA worker and a farmer at Akosombo where he had a vast land on which we cultivated almost everything. We also had a backyard farm at home so my interest in farming is traced back when I was young and I loved it.”

She said she also took inspiration from two professors at the University of Ghana, Legon, the late Prof. Aryee and Prof. Aryetey   when she went to pursue her master’s degree.

After several years of practicing as a teacher, the mother of three said she decided to divert into farming because she knew that with experience from her father, she would be successful. “Fortunately my husband also hails from a farming community so it was easy for me to start with his support. “ She started manually and on a small scale with maize farm at Likpe in the Hohoe Municipality but now, she can boast of several mechanized farms, employing a lot of workers and about 3000 out growers.

Mrs. Mabel-Ann Okata Kwudzo had her “O” level at St Mary’s School at Korle-Gorno. She pursued her Bachelor of Arts Degree in Psychology (specialized in children with special needs) and Masters degree in Agronomy both from the University of Ghana, Legon. She taught at Soul-Clinic International School (East Cantonment), and Morning Glory Montesorri (Teshie Nungua) for many years after her first degree.