With the stress and money invested in farming and the several reported challenges associated with post-harvest losses, one would say agric is a risky endeavor. It is also known that the reasons most people or young folks shun away from farming to a large extent is due to the perception of farming being laborious, archaic and unprofitable.

But the CEO of Okata farms and food processing, Mrs. Mabel-Ann Okata Kwudzo is of the strong believe that despite the challenges in the field, it still remains the most lucrative and rewarding job ever especially with mechanization.  “Apart from the fact that there is real money, you are closer to nature with farming and this keeps you healthy.” 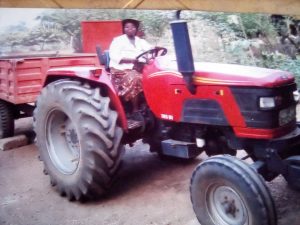 “People do not see farming as profitable because it is very difficult to do but once you are able to breakthrough with mechanisation, the prospects are high.” She admitted that most farmers are unable to afford mechanization but even with that challenge they, however, with hard work and observing best practices can still make it. “With hard work, you will see real money.” She added.

In an interview with agrighanaonline.com, the 2017 2nd National Best Farmer urged the youth to embrace farming as a profession. She says the youth are in a better position to adopt modern and best practices in farming to advance the sector further.

Comparing her farming profession to her previous jobs, she said farming is the best. It is for this reason she welcomed the idea when one of her sons decided to take up farming as a profession.

“He has even gone further to pursue her degree in Sustainable Agric and Food Security at the University College of Agriculture and Environmental Studies at Bonso.” she stressed.

The focus however should not entirely be on the money, “You need to have the passion love and with hard work, you will excel.”

According to her, with mechanisation, a 1000 acres rice farmland can produce 22,000 bags of rice or (2000) tonnes of rice after each farming season. Apart from the monetary prospects, agriculture or farming provides employment for a lot of people especially the youth.

“The country imports 700,000 tonnes of rice and Imagine if just one local farmer can produces 2000 tonnes of rice then with the collective boost and support from the government, local rice production can meet the demand.” She added.

She also indicated that venturing into vegetables alone can be very profitable since there is the market once you harvest. “Immediately you harvest it’s sold out.” She said.

Currently, she can pride herself of owning a 1000 acres of rice farms, 100 acres Maize farms, 10 acres Cocoa farm, 20 acres each for local and agric palm plantations, and 5 acres farmland where she grows all forms of vegetables. She is also into food processing and animal husbandry.