Cashew farmers in Kintampo say they have been impacted negatively due to global restrictions caused by the coronavirus (COVID-19). They say the shutdown of export markets in Asia is having devastating impact on the livelihood on cashew farmers locally.

Farmers observed that early this year, the local market price of cashew was about GHC 6 per kilo but it is now pegged at about GHC1.50, a 75% drastic fall. Many smallholder farmers say a lot of them are struggling to breakeven after contracting loans to invest into their productions.

As of now, many large cashew buying companies have stopped the purchase of new nut even at the lowest price of GHC 1.5 per kilo. This is making them leave their nuts to rot.

Mr. David Awara is a 50-year-old farmer who has just brought his nuts to sell; he was almost declined by the buyer. It had to beg consistently amid pleading to get his nuts sold. The buyer then told him that was his last purchase for the week, he cannot make any further purchases until the big companies come to off take what he has in stock now.

‘’This is a crisis; I have never had to beg to sell my cashew. Recently these buyers were chasing us all over for nuts, but look at things now, it’s a total reverse. If things don’t change, I may be forced to cut my entire cashew trees’, Mr. Awara stated.

Chairman of the Kintampo Municipal Co-operative Cashew Farmers and Marketers Union, Pastor Emmanuel Banyoo, said the situation is heartbreaking. ‘’It is a very difficult time for farmers and other players within the value chain particularly exporters, we the aggregators are not buying from the farmers anymore because we do not have enough storage facilities to keep the cashew nuts for long. Besides, we cannot bear the cost of holding the stock; such costs like daily drying and bagging are a burden. We have no other option than to turn most farmers away.” 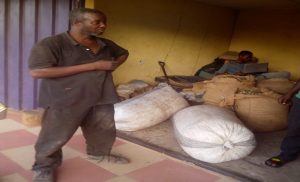 Pastor Banyoo call for support for cashew farmers in this critical moment, saying, ‘’Our cashew farmers are in crisis and this is the time they need more of our support; financial institutions and individual investors should find a way of buying the raw nuts and storing whiles waiting for the pandemic to normalize across the globe ‘’.

A farmer and Member of Parliament for the Kintampo North Constituency Kwasi Etu-Bonde revealed that the cashew sector is constrained by weak value chain linkages due to uncoordinated policies.

“Ghana has comparative advantage to process more raw cashew nuts to the global market yet the non-existence of key agricultural infrastructure and high utility bills makes it impossible for local processors and exporters,” he pointed out.

When contacted, Secretary of Ghana National Cashew Farmers Association, Clement Anane said that even though the cashew sector had its own challenges, the corona virus pandemic has exacerbated matters lamenting that , “100kg bag of Raw Cashew Nuts has reduced from GH¢700 to between GH¢350; he said they   are ‘’forced to sell the fruit at a profit-less price,” . He added that Ghana alone contributes 43.8% Cashew to the global market.