Adwoa Nyibi with one of her extension officers

Adwoa Nyibi is a small-scale farmer in the Bono East Region of Ghana who is finding success because she works hard and is open to trying new farming practices. She has already contacted extension staff to learn about new technologies and the best agricultural practices for planting once the rains start.

She has been preparing the land on one of her seven-acre farms, where she is planning to grow crops such as pepper, groundnuts, and maize. She believes that women are more open to trying new farming practices because they rely on farming as their sole source of income for supporting themselves and their children. Justice Lieber is the agricultural extension officer at the Ejura Department of Agriculture. He says: “Often, women’s attendance and participation at training is very encouraging and their adoption level is always 65-70% higher, as compared to the men.”

It’s five o’clock on a hot Thursday afternoon. The sun is setting slowly, paving the way for the cool evening breeze. Adwoa Nyibi is just arriving home from her two-acre cowpea farm. She says, “I am yet to harvest the cowpeas which I planted last year. Currently, I am busy preparing for the next crop-growing season so that I can plant my other crops with the early rains.”

Mrs. Nyibi is a small-scale farmer who hails from Pumpuano village in Kintampo district, in the Bono East Region of Ghana. She is a hardworking woman: earlier today, she prepared land on her other seven-acre farm where she is planning to grow crops like pepper, groundnuts, and maize.

Mrs. Nyibi says that, because she works hard on her farm and has tried a number of new farming practices, she is finding success. She says, “I had a good crop yield last year because I followed diligently the advice and new technologies introduced to me by the agricultural extension officers.”

She adds, “This year, I have already contacted the extension staff who introduced me to new technologies and best agricultural practices to help me to do proper planting once the rains start.”

In some cases, women farmers seem more eager to learn and adopt agricultural innovations than their male counterparts. Mrs. Nyibi is an example of a good adopter of new farming practices.

She says that, because she farms year in and year out to take care of her children, she always follows the agricultural methods and practices that extension workers teach her.

Mrs. Nyibi adds: “Unlike the men who have access to large farmlands and can easily find jobs for additional income, women [tend to] participate fully with keen interest in farming activities whether in groups or as individuals because we know it’s our main source of income.”

She says: “I belong to a group of farmers called Tajutar where we learn best agricultural practices. Although our group is male-dominated, more women participate in most of our activities.”

Mrs. Nyibi says the group has helped more women to adopt farming practices than men because the women share experiences and learn from each other based on what extension workers teach them.

She says, “Some men become jealous when they realize that the produce of women farmers on small pieces of lands yield better than theirs on large pieces of land.”

Mrs. Nyibi says she learned some of her farming techniques from the Scaling Her Voice project implemented by Farm Radio International, which aims to increase farmers’ knowledge about good agricultural practices.

Justice Lieber is the agricultural extension officer at the Ejura Department of Agriculture in Ghana. He says that farmers are learning about using improved crop varieties, effective seed selection techniques, timely application of fertilizer, germination tests for seeds, cleaning farm and storage structures, and post-harvest management. 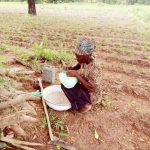 Mr. Lieber explains: “The project has proved that women are early and best adopters of innovations, particularly when it comes to good agricultural practices. Even training in food processing, men are mostly not interested.”

He adds: “Often, women’s attendance and participation at training is very encouraging and their adoption level is always 65-70% higher, as compared to the men who are always within 30 to 35% because they want to see others with results before they follow suit.”

Freeman Akapala is a male farmer in Kintampo district. He says that, on average, women farmers are indeed better and earlier adopters of new agricultural technologies than men. He adds that this is why most people use women labourers on their farms.

Mr. Akapala explains: “Women follow diligently the recommended fertilizer application, the seed rate per hole, and many other farming techniques. They are good in planting compared to men who are always in a hurry to go and search for money elsewhere and end up not following what they have been trained by extension workers.”

Mrs. Nyibi says that, because she follows recommended farming practices, her yield has been improving every year. She explains: “Before 2019, on [my] one-acre farm, I used to harvest three bags of chili. But in 2020 when I adopted the new farming technologies, I harvested 15 bags. My groundnut production has improved to four from three bags. I now harvest 40 bags of maize from the 20 I used to get previously.”

Source: Farm Radio International (This resource is undertaken with the financial support of the Government of Canada provided through Global Affairs Canada.)